Born enslaved, Frederick Douglass emancipated himself at the age twenty and quickly became one of the preeminent intellectuals and activists of the nineteenth century. Although he never knew his birthdate, he chose to celebrate every year on February 14th. Together with libraries and digital scholarship centers around the country, we celebrate Douglass Day as a moment for creating and preserving Black history together.

This year, Cornell University Library celebrates with a transcribe-a-thon of the papers of Mary Ann Shadd Cary (1823-1893)! She was one of the earliest Black women to edit a newspaper, serve as a Civil War recruiter, attend law school, and so much more. Together we are presenting newly digitized and fascinating collections from Shadd Cary’s long and fascinating life. Learn more about Mary Ann Shadd Cary and her legacy.

Douglass Day is sponsored locally by the Digital CoLab at Olin Library in partnership with the John Henrik Clarke Africana Library. Contact DigitalColab@cornell.edu with questions.

Douglass Day 2023 is presented internationally by the Center for Black Digital Research at the Pennsylvania State University and Zooniverse. 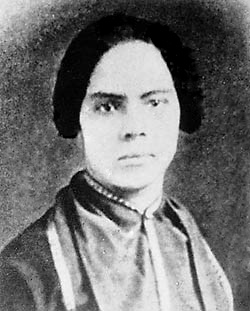 Douglass Day is a national event for creating and preserving Black history in honor of Frederick Douglass. This year, Cornell University Library will celebrate with a transcribe-a-thon of the records of Mary Ann Shadd Cary (1823-1893), one of the earliest Black women to edit a newspaper, serve as a Civil War recruiter, attend law school and more. Together, we will learn about Black abolitionist history and create textual data for the future. Cornell University Library staff will help you get started with transcription -- no previous experience is necessary! Snacks from Rashida Sawyer Bakery will be provided to in-person participants.

No transcription experience needed! If possible, please bring a laptop to participate. Library computers will also be available.

Can't make it to the in-person event? You can still participate virtually!

All national events will air on the Douglass Day YouTube Channel. There, you can also find tutorials on how to transcribe using the Zooniverse platform. The 2023 Transcription & Resources Guides page is forthcoming.

Harriet Tubman: Visions of Freedom is a rich and nuanced portrait of the woman known as a conductor of the Underground Railroad, who repeatedly risked her own life and freedom to liberate others from slavery. Born in Dorchester County, Maryland, 200 years ago—2022 marks her bicentennial—Tubman escaped north to Philadelphia in 1849, covering more than 100 miles alone. Once there, Tubman became involved in the abolitionist movement, and through the Underground Railroad guided more than 70 enslaved people to freedom.

The film goes beyond the legend of Tubman to explore what motivated her— including divine inspiration—to become one of the greatest freedom fighters in our nation’s history. The film is narrated by Emmy® Award-winning actor Alfre Woodard.

Becoming Frederick Douglass is the inspiring story of how a man born into slavery became one of the most prominent statesmen and influential voices for democracy in American history. Born in 1818 in Maryland, he escaped from slavery in 1838 and went on to become the most well-known leader of the abolitionist movement. A gifted writer and powerful, charismatic orator, it is estimated that more Americans heard Douglass speak than any other 19th-century figure—Black or white.

The documentary explores how Douglass controlled his own image and narrative, embracing photography as a tool for social justice, and the role he played in securing the right to freedom and complete equality for African Americans. The film features the voice of acclaimed actor Wendell Pierce as Douglass. Executive produced by Academy Award-nominated Stanley Nelson and Lynne Robinson, both films are produced and directed by Nelson and Nicole London.

Sponsored by the Department of Literatures in English. Part of our Campus Collaborations series. Learn more at tubmandouglassfilms.org.